Soi was covered in the Hindu! 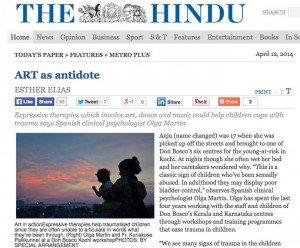 Anju (name changed) was 17 when she was picked up off the streets and brought to one of Don Bosco’s six centres for the young-at-risk in Kochi. At nights though she often wet her bed and her caretakers wondered why. “This is a classic sign of children who’ve been sexually abused. In adulthood they may display poor bladder control,” observes Spanish clinical psychologist Olga Martin. Olga has spent the last four years working with the staff and children of Don Bosco’s Kerala and Karnataka centres through workshops and training programmes that ease trauma in children.

Read the full article on the website of The Hindu

There are no comments published yet.